More Than Meets the Eye: Tomás

We would like to introduce you to a vegan friend of ours who often gets funny looks when he tells people that he is vegan. And why is that? Because he has managed to maintain quite an impressive muscular physique on an entirely plant-based diet! 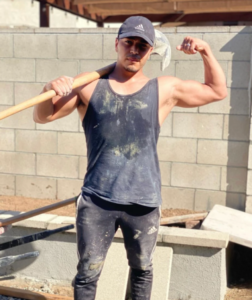 San Diego resident and realtor, Tomás addresses the common misconception that vegans have a particular “look” or can’t put on as much muscle as non-vegans. Tomás is living proof that this is not the case, and a great example of why you should never judge a book by its cover.

Another misconception about the vegan community that Tomás has directly disproven is that vegans are unable to get proper protein in their diets. We think those muscles say otherwise and with the right food intake, all-natural supplements, and exercise, you can do it too!

The Importance of Vegan Calcium

Tomás’ vegan journey began in August 2017 after he suffered from an injury that resulted in a broken arm. He learned about veganism through his doctor who advised him to get calcium from plants instead of drinking milk. His doctor said that doing so would help his bones remain nice and strong and provide him with a faster recovery time.

His doctor estimated that his recovery would take about 8-10 weeks. However, by switching to a plant-based diet and obtaining calcium through plants, he was able to recover in only 5 weeks! Not just that, but he also had his blood work tested after those 5 weeks and his cholesterol had dropped from 240 to 170. Wow!

This made Tomás even more intrigued by the vegan community, leading him to watch the popular vegan documentary, “What the Health?” He continued to educate himself on the vegan lifestyle and decided to make the switch permanent. This is where his vegan journey began, and once started, he never looked back. He says, “I feel at peace with my decision and I feel way more healthy and energetic.”

While Tomás says that he has yet to convince anyone to become 100% vegan, he has inspired his friends and family members to reduce their animal intake for the well-being of themselves as well as the world.

Lastly, Tomás says that while being vegan is the right thing to do, it is important to take time to relax and enjoy yourself. Never be too hard on yourself if you slip up along the way and always make time to do the things you love! For Tomás, these things include exercising, traveling, hiking, and spending time with his wife. Lucky for him, she’s vegan too!

At Vegan Life Nutrition, our products are designed for all vegans! Whether you started your vegan journey many years ago or are just getting started, we aim to provide the entire vegan community with plant-based products to support your plant-based lifestyle.

We don’t sacrifice quality for innovation. Our products are always free of toxins, allergens, and unnecessary ingredients. How? We strictly examine raw ingredients and fully-vet each final product. Quality is our top consideration, and we adhere to the guidelines of some of the toughest regulatory authorities in the world.