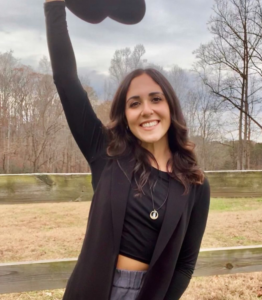 One of the foremost reasons why many people choose to be vegan is their love of animals. We believe that animals deserve to live in peace just as humans do. For many of us, this is where our vegan journey begins, and for our friend Michelle, it serves as the sole purpose for her vegan transition.

Michelle started her vegan journey in 2017 and in a similar way as many of our other Vegan Life Nutrition friends; as a vegetarian! It wasn’t until she became more informed about the seriousness of animal cruelty that she decided to switch to a vegan lifestyle. She also found her voice and became a vocal member of the vegan community.

Using her voice to educate

While living a vegetarian lifestyle, she quickly came to the realization that she wasn’t doing enough to inspire change and put a stop to harmful acts against animals. She began watching different documentaries about veganism, including What the health and Game Changers, which is what inspired her to cut out all animal products from her life.

For Michelle, watching these documentaries opened a new door to an unknown world and allowed her to develop a new appreciation for the vegan community.  Michelle maintains an Instagram account @vegout_withme_ and her posts are not only creative and original but educate others about veganism, ethical decisions, and nutritious vegan meals. She is definitely someone that inspires others!

Any dish can be “veganized” and tasty

Michelle says that she feels amazing! She has lots of energy and keeps her body nourished with food that is grown from the Earth.  When Michelle is not working as a pediatric speech-language pathologist in her hometown of Charlotte, North Carolina, she enjoys hiking, working out, running, yoga, cooking vegan food, painting and spending time with her dog.

A common misperception that Michelle believes should be cleared up about being vegan is the idea that “vegans are depriving themselves from good food.” She wants everyone, especially those considering switching to a vegan diet, to know just how delicious vegan food actually is. If you don’t believe her, try out some of her favorite types of vegan dishes: Thai and Ethiopian. She also says that eating a vegan diet isn’t as hard as it seems and that pretty much all non-vegan recipes can be veganized.

Like many other life changes, having the support of your loved ones is key to positivity and success. Michelle shared with us that her boyfriend, sister, and stepmom have all embraced the vegan lifestyle.  She’s educating her dad, mom and brother about the benefits of making that switch.

Just like many of the others who have shared their vegan journey with us, Michelle says that going vegan is the best decision she’s ever made. Her only regret is not doing it sooner.

Vegan Life Nutrition is proud to be a part of so many vegan journeys.  We don’t sacrifice quality for innovation. Our products are always free of toxins, allergens, and unnecessary ingredients. How? We strictly examine raw ingredients and fully-vet each final product. Quality is our top consideration, and we adhere to the guidelines of some of the toughest regulatory authorities in the world.